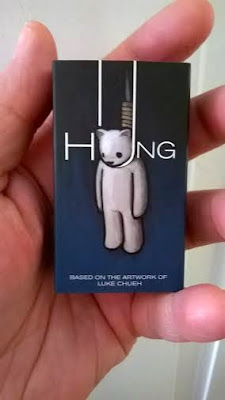 Let me tell you folks a story.  It's starts last week when I woke up very early in the morning with the worst pain I've ever felt in my guts.  Seriously, it was like being stabbed with a sword that was made out of bees who were also on fire and on parole.  I woke my wife up and made her drive me to the emergency room.  One CT scan and entire work day later, I was diagnosed with an overachieving kidney stone.  Despite my pain I was kinda proud that rather than making some little baby pebbles in my urinary tract I had instead formed some calcified hell beast that was leaving a trail of destruction in its wake.  I say go big or go home.  So here I sit, days later, with enough pain medication to get me on an episode of Intervention and an appointment to blast this behemoth into tiny pieces via some big speaker and a Pantera record.  Or at least that's what I think my insurance will cover, I'm not really sure. 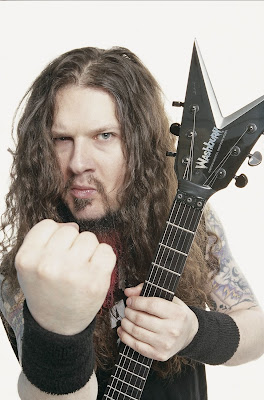 Dimebag's gonna heal me from beyond the grave.  Then bill my HMO.


But back to the pain, cause that bugger hurts enough that swinging from the old gallows seems like a good method of treatment.  I bet this polar bear from Luke Chueh and Munky King had one and no amount of pills could make him feel better.  Actually he probably did it because of global warming and the destruction of his natural habitat, so think about that the next time you throw your soda can in the regular trash instead of the recycling, ya jerk.  Though I prefer personally to believe that he just based his life around the wrong Johnny Cash song and he met a tragic end after being involved in some Wild West justice.  We'll go with that one. 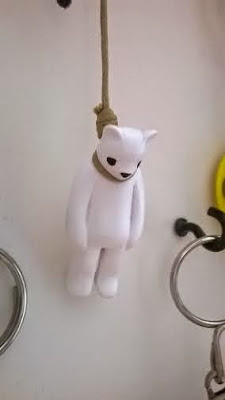 So I think this could go in the record books as the tiniest designer toy ever made.  Not that it's a bad thing by any means, because how often can you take the things you're obsessed with around with you?  He comes with a little plastic peg that fits into your cell phone's earbud jack, so everytime you text you can one-up the person next to you with the bedazzled case that says "princess". 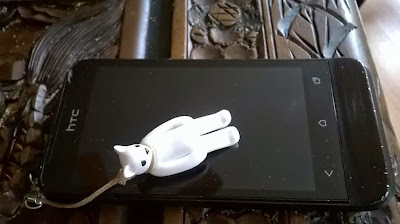 You can BEARLY notice the cracked screen.


If that's not your thing the piece is removable, leaving behind a clip that can be attached to your zipper,  or you could put it on a necklace, or you could buy two of them and make a set of earrings that will surely be the hit of your family's annual Christmas photo.  But my favorite use thus far has been impromptu cat toy.  Behold: 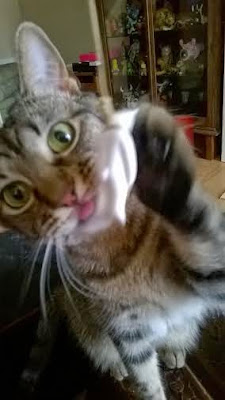 
One of the things that really impresses me about this figure is that the noose is not plastic, but is a piece of string that would have to have been hand tied.  Now I've read a fair amount of resumes in my day but never have I seen one that had "tiny noose making" listed as a skill.  How do you even find out you're good at something like that?  Were you just a wee little lad, handing out rough justice to cockroaches?  I just imagine there was a meeting at the factory and the head guy was like "we have a problem, we need someone that can tie 1000 tiny nooses" and then the normally quit guy in the back formed the biggest smile on his face, thrust his hand triumphantly in the air, and said "sir, I've been waiting my whole life for this opportunity."  He is now the head of his own department.


You may or may not know that I like to joke around a lot (I know, I do hide it really well) but there's nothing funny about suicide.  Munky King will be donating a portion of the proceeds from this figure to suicide prevention charities.  Pick one up this Sunday, May 24th, at www.munkyking.com and grow your collection while helping a good cause.
Posted by Chris at 9:28 AM