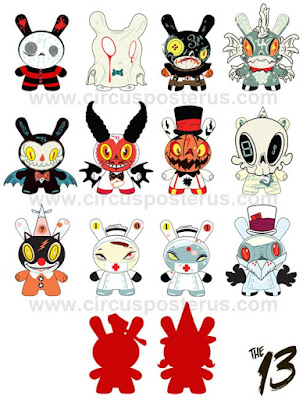 Man, I have been hurting recently.  I've been passing what feels like concrete shards through places sharp objects were never intended to be.  Two emergency room trips, one surgical procedure, and a hell of a lot of boredom while trying to get better and I finally think I've turned the corner.  The worst part (besides the pain, silly goose) was that I fell into a dark place.  I'm not talking about that spot between your couch cushions that both science and God have abandoned; I got depressed not being able to go to work and being stuck watching lawyer commercials on daytime television.  Granted, its not nearly the worst that could happen to someone, but it still sucked just waiting around to get better.  Even the internet became boring, until I saw these guys.

I'm going to go a head and call this as the best series of Dunnys I've ever seen.  Normally I'm more a fan of the annual series that features a bunch of different artists because I like a variety when it comes to the designs.  But this set from Brandt Peters and Kidrobot really goes above and beyond to not be repetitive while still retaining a clear cohesiveness.  There's not a single one I wouldn't be excited to own and I usually never get that excited just based on the artwork at not photos of the actual figures themselves.  I was gonna hold out and post about these when the product shots started making their way online, but Circus Posterus is running such a ridiculously awesome preorder for a case of these that I didn't want you to miss out.  Right now at www.circusposterus.com you can reserve yourself an entire case of 20 blind boxed figures for $225.  Not only are you getting a discount on the case but you'll also receive a 5x7" original sketch from Brandt Peters himself!  So you'll get a ton of toys, some original art to hang on the wall, and the best time of your life sitting on your floor opening blind boxes.  You might need to take a few days off from work to recover.
Posted by Chris at 9:03 AM