Cue the Rocky Theme, Cause I'm Feeling Like a Champ Reviewing the Batman Labbit from Frank Kozik x Kidrobot 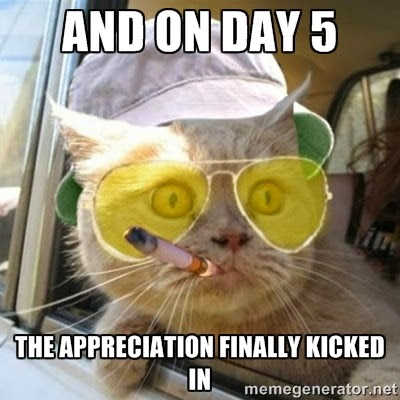 We made it, folks!!!!  Originally the plan was to do five reviews in five days, but I think we should go bigger.  This is Labbit Appreciation Week after all, so I'm using the last bit of gas in my tank to do SIX reviews in SIX days!!!!  I know, it's pretty nuts.  This is like Evel Knievel jumping the Snake River, except I'm gonna land safely on the other side, thrust my fists in the air, and get my face on a commemorative plate.   And we're gonna do a giveaway on Instagram to celebrate all the fun we've had this week.  More about that later on though. 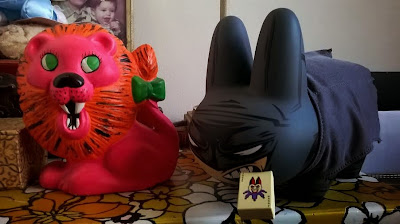 Uh oh, it looks like Batman has pulled The Joker's card, and being that I've heard an N.W.A. song or two in my day, I know that means bad news for a certain clown.  This isn't Adam West's Batman folks; this is the gritty, unshaven vigilante that Christian Bale and Christopher Nolan made so popular.  The Dark Knight indeed!! 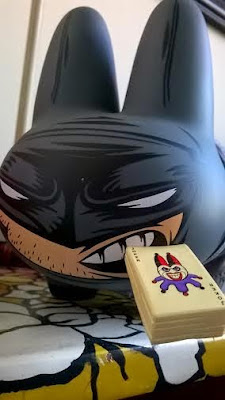 This dude is the perfect companion piece to The Joker that I reviewed earlier in the week, and where the former shined with subtlety, the latter is killing it with tons of printed details.  Lots of black shadows and a fully stocked utility belt really bring the character to life.  Like The Joker there is no sculpting on this Labbit, which really serves to give it more of a comic book feel.  It also speaks to how great the art is that I don't miss the 3D aspects that we've come to expect in recent releases. Though he does come with a removable cloth cape, which after I took the photos I decided to put in a drawer because we have a cat that would see that as an appetizer.  He's already had to have a shirt sleeve removed from his gut, so his trustworthiness around any sort of fabric is less than none. 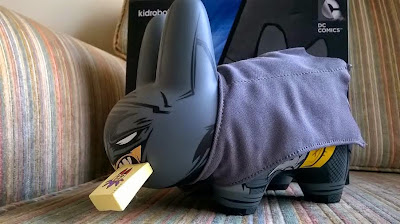 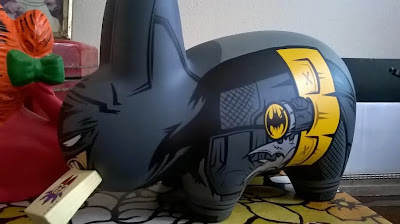 Do I love it?  Yes, yes I do.  I'm a sucker for anything Batman, but especially when it's presented in such a unique way.  It's the perfect marriage of a well-known license and a designer toy. 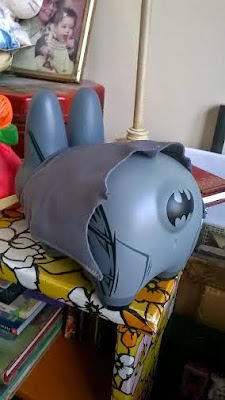 The caped crusader is available right now at www.kidrobot.com and wherever designer toys are sold.