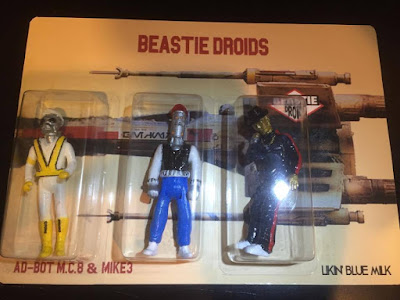 When Licensed To Ill came out I was in third grade and I begged my mom for the tape.  I have no idea where I would have learned about it, maybe MTV played one of the videos or something, but I had to have it.  That was quite a few years ago and it took me a long time before I realized that "Brass Monkey" wasn't a metal simian they were carting around to party with them, or that Brooklyn didn't really have any castles like medieval Europe.  I read somewhere that based on how many copies of this album was sold, that one in every ten Americans has one, which is one of those useless, mind-blowing facts that may get you a win at Trivial Pursuit on game night, but is just gonna take up space in your brain that could be actually used to make money.

Holy crap did you see the backing card on this thing?  That artwork is brilliant.  My main man pots and pans Dead Greedy said that some killer art work wasn't enough for his fans.  He also took some Star Wars droids, made em into the ills white boys on the planet, and slapped em on the front for your collecting pleasure.  You gotta get your hands on these by checking out this link right here. 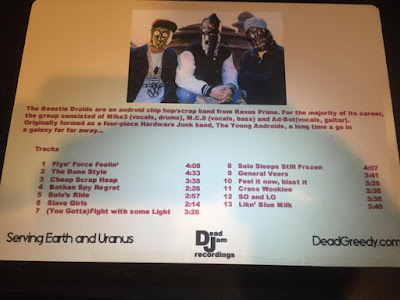