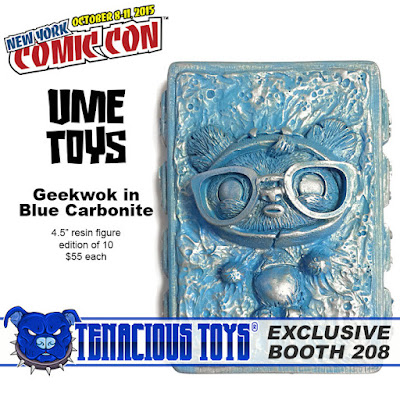 Just so we're clear, these are not nearly all of the exclusives Tenacious Toys will have at New York Comic Con.  They've got so many that I've gotta take it slow or I'll get overwhelmed and not be able to function.  So let's examine a few of my favorites.

I don't get all the hatred towards the Ewoks.  In fact, I didn't realize that people didn't like them until that whole Jar Jar Binks fiasco in which people were forced to remember all the reasons George Lucas pissed them off.  Let me tell you, if I just destroyed the reign of the Galactic Empire with a bunch of delinquents I would expect teddy bears to sing (literally) my praises too.  Lay off the poor Ewoks, people!  UME Toys loves the Ewoks so much that he has decided to preserve his popular Geekwok figure in carbonite forever.  And it's a special Tenacious blue carbonite, which makes it even better.  Only 10 of these exist and they will be $55 each. 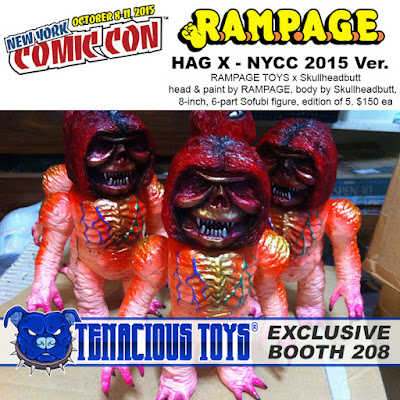 Can you call a woman something worse than a hag?  I mean, I know there are words that I won't mention here that society has deemed far more scandalous, but hag just sounds so harsh.  Literally, go ahead and say it, and put some anger in your voice when you do.  That's a word you save for special occasions, like if someone kicks your puppy or something.  Rampage Toys and Skullheadbutt have definitely captured the ideas that word conjures in this figure.  Not that I haven't kissed worse looking girls, because I was after all a teenage boy once, but this chick looks like she's doomed to a life spent alone in the woods whose only visited by stupid kids that were dared to knock on her door.  We all know how The Blair Witch ends so you better leave her alone!  Limited to 5 figures at $150 each. 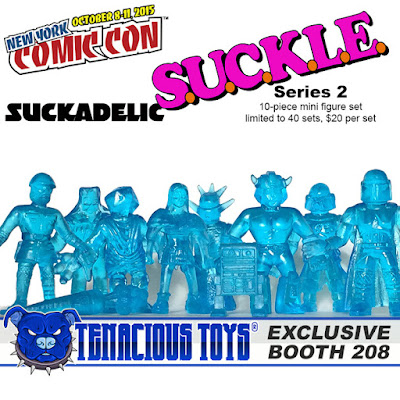 Has the economy ever really recovered or have we just gotten used to being poor for so long that we accept this as the new normal?  Well I for one haven't and that's why I'm so cheap.  I buy the store brand bread, and the bo bo cereal that comes in a bag, because I try to save my cash for stuff I really want.  But I also want to get value in the stuff I want, and that's why this pack of figures from the Sucklord is exactly what this world needs now.  You get 10 mini figures for only $20.  Ten figures!!!!!!  That's enough to stage your own epic pretend wrestling pay per view.  They're limited to 40 sets, so I'm expecting 40 Youtube videos of these guys wrestling each other or I'll be sorely disappointed. 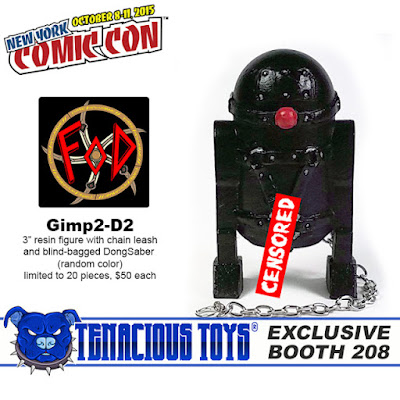 If this picture is any indication, that new Star Wars movie is gonna take a really disturbing turn.  Evidently hard times have fallen upon one of our favorite droids, and he has been forced to earn his space credits the only way he knows how.  I'm probably gonna have nightmares about this.  Forces of Dorkness is the demented mind behind this figure, which would have scarred my childhood had many other things not already beaten it to the punch.  This freaky robot is limited to 20 pieces at $50 each.