Check Out This New Figure From Javier Jimenez: Dorobanii the Jackalope 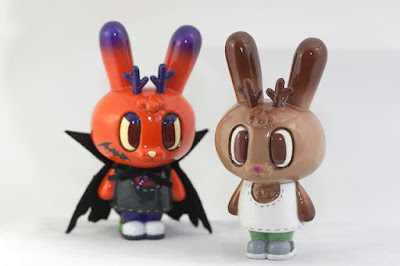 Since the dawn of time, people have ben obsessed with sticking animals together to create new ones.  It's kind of a weird thing to do, but people seem to get a kick out of it.  From the Fiji Mermaid, which is half monkey half fish, to two-headed monstrosities featured in sideshows, we just can't get enough of tinkering with critters.  One of the cuter biological mashups of there is the jackalope, which for the uninitiated is a rabbit with antlers that can be found stuffed and ready for sale in all the best roadside souvenir shops throughout the american southwest.  Thankfully, someone has finally created a much more adorable version that doesn't require a two parts roadkill and one part super glue.

Javier Jimenez's latest creation is this adorable little jackalope named Dorobanii.  You can check out his whole backstory by watching this video:


He is available as we speak in the two different versions you see above.  There the regular edition, and a special Halloween edition that is limited to only 15 pieces.  These little resin dudes are only available from http://www.stickupmonsters.bigcartel.com.
Posted by Chris at 6:24 AM