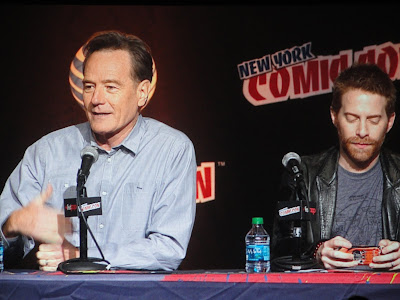 I told you yesterday about how Comic Con has the ability to scramble your brain and make you forget how to handle real life.  Well as the day progressed I started getting my wits about me and was remembering all the stuff that I totally forgot to tell you in my post yesterday.  So in the spirit of full disclosure, here are the highlights of my weekend at New York Comic Con, presented in no particular order.

-  For the second year in a row, former WWE superstars The Honky Tonk Man and Bushwhacker Luke caught the same train I was on to get into New York.  Not only that, but they were in the same car and I totally resisted yelling "hey, it's The Honky Tonk Man" in my best southern drawl.  Instead I whispered it to my wife the entire rest of the day.  We also saw Jerry The King Lawler and Hacksaw Jim Duggan, but they were in their booth's during the show so it wasn't quit as cool.

-  On the way to the convention the first day I found $40 on the sidewalk.  And on both return train trips the conductor never bothered to take our ticket, so we essentially got two free rides and still have tickets for the next time we go to New York.  I will probably be diagnosed with intestinal worms in the near future to balance that good karma out.

-  I saw a panel with Bryan freakin Cranston.  Like, I was within NFL quarterback throwing distance of one of the greatest characters in one of the greatest tv shows of all time.  This may top the time I could almost see Kevin Bacon's face without the aid of the jumbo trons at The Following panel two years ago.  I really gotta get better at being earlier to these things.

-  My wife developed a new technique where she gets in line for the bathroom before she even has to use it so by the time she makes it to the front of the line she is fully ready to utilize the facilities.  She developed this patented method after realizing she only packed one pair of jeans and the embarrassment that could ensue if she were to wait until the last minute to try and get to the restroom.  The moral of the story is that thereis always a line for the women's bathroom at this thing, and like Mt. Everest, most people will die before they ever reach the summit.  The bright side is that their corpses are great landmarks for you to judge your wait time by.

- Funko is a nefarious organization hell bent on controlling the world.  Everywhere you turned there was Funko product.  Every booth sold it, the carpet was made out of it, and I think I ate a Pop Vinyl for lunch.  What if all those toys were really mind control devices that we have willingly brought into our home, then a flip will be switched and The Greak Awakening will begin.  We will all be locked in their factories, making more toys that serve to force us into an endless loop of obedience.  We become our own enslavers in some weird, dystopian world slowly being filled more with cute action figures than real people.

-  DC Comics always has props and costumes from their films on display and it is literally one man's job to make sure the bat suit shows up.  And when he's not putting stuff on display at conventions he's just chilling in a warehouse surrounded by the coolest stuff you'll never get to play with.  I imagine it looks like that scene from Raiders of the Lost Ark where you just see miles and miles of boxes, except here there's a dude wearing Christian Bale's cod piece while pretending he's having the best Christmas morning ever.

And that my friends, is what Comic Con means to me.  Wait, was that the original point of this?  I don't remember and it's too far to scroll back up.  You can check out all the pictures I took by visiting www.facebook.com/TheToyViking.
Posted by Chris at 5:50 AM