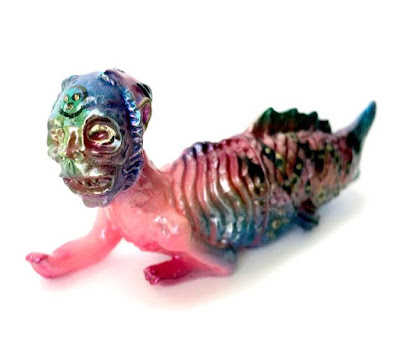 If Fiji Mermaids were real no one would ever go fishing again.  The thought of pulling some haggard old monkey fish onto your boat is just the sort of thing that can ruin an afternoon of fun.  Not that I've ever really thought catching fish was the most fun thing.  I'd rather stay at home and watch Netflix and not have worm guts all over my hand and smell like something from the deep sea.  Any time I've ever gone fishing I've managed to impale some part of my body with the hook, which I take as a sign from the universe that I should be doing other things.  Once it even went all the way through my thumb and the dumbest part about that was that it happened in a friend of mine's garage and nowhere near the open ocean.  I was just bouncing around on a Pogo Ball and I fell over next to some fishing rods and the next thing I knew I was wondering how the hell I was gonna explain this.  That whole Pogo Ball reference just dated me big time, didn't it?

Awesome Toy and Gorgoloid have one of the most bizarre sofubi creations ever with this dude and Candie Bolton has lent her talent to pretty them up a bit.  They're so shiny that now they look like the lures you would use if you wanted to catch one.  Get one for your collection this Sunday, July 31st at 6pm pacific time only from http://www.candiebolton.com.  Bait not included.