Glow in the Dark Bite Size from Radioactive Uppercut 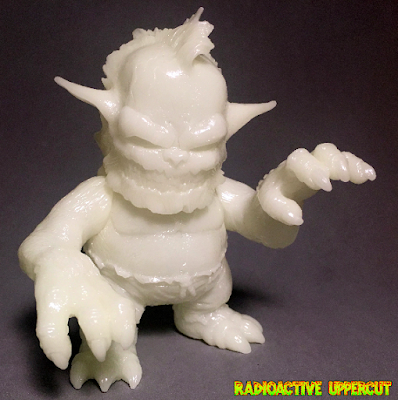 I know that by Tuesday of next week one or more of you are probably gonna light some explosives to celebrate America's independence.  I'm not saying don't do it, cause I grew up down south and bad ideas are pretty much a lifestyle, but whatever you do don't do anything that would prevent you from getting the best, most informative and strikingly handsome toy news on the internet via this very website.  If you lose a couple of fingers you'll probably still be able to type The Toy Viking address and be enlightened (pun intended) by whatever wisdom I choose to bestow upon you.  But you were only gifted with two eyes, and losing both of them while kneeling to inspect whether or not a Roman candle is a dud would suck pretty hard.  Plus, I know you're reading this while at work and avoiding your responsibilities and you're totally gonna get caught if you have to ask someone to read it to you.

There are many alternatives to lighting fireworks that will not only let people from far and wide know just how damn free you are, but have little to no chance of disfiguring you. I've been assured by Radioactive Uppercut that his Bite Size figure, no matter how menacing looking, is not likely to turn your flesh into something the cops are gonna want you to explain.  These dudes are cast in milky white vinyl and glow like Abraham Lincoln's ghost when he defeated the aliens during the War of Roswell.  There ain't many of these bros in existence, and your chance to snag one comes on the evening of July 1st at 8pm eastern time.  Get er done at www.radioactiveuppercut.storenvy.com.