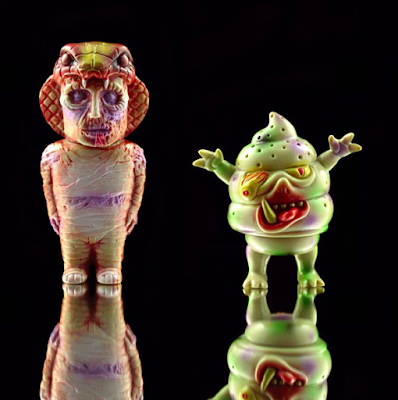 It will take me longer to think of something witty to say about these dudes than it will for them to sell out when they get posted later today.  Splurrt's work, deservingly so, is highly sought after and it's not going to change with the release of Serpent Sata and Puppoo.  I would watch a buddy comedy staring these dudes and this would be the premise: Serpent Sata is a hard nosed cop whose partners always seem to end up dead, while Puppoo is just a rookie turd who has more heart than brains.  Together they are trying to bring order back to a once peaceful Chinatown that finds itself riddled with organized crime.  Then hilarity would ensue in some fashion.  I really see The Rock and Kevin Hart taking this project to new heights.

Today at non pacific time these will go up only at www.lulubelltoys.com, so schedule your work breaks accordingly.
Posted by Chris at 9:18 AM