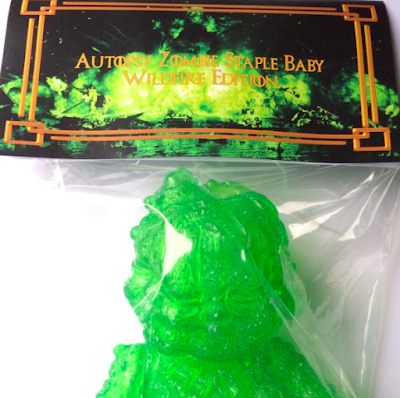 One of my favorite scenes ever from Game of Thrones is during The Battle of the Blackwater when Bronn draws back his bow, launches a flaming arrow, and ignites the ship loaded with wildfire thus destroying Stanis Baratheon's invading fleet.  That moment as it races towards the vessel is the most peacefully epic moment... right before it melts the flesh from those unfortunate souls.  It's pretty much the best way you can end a battle as long as you don't miss.  My luck I'd burn my hand on the arrow, double over in pain, and end up shooting Tyrion through the head.  The show would have taken a much different turn without the imp.

Wildfire is dirty business but it sure is pretty to look at, which explains the vinyl color of Miscreation Toy's latest Autopsy Zombie Staple Baby.  Who knew an undead baby thing could be so attractive.  These will be available on Friday, July 15th at 3pm eastern time from http://www.miscreationtoys.com and I'm told will not explode if lit.  Unlike a real bloated corpse who will explode if you take a speed bump too quickly.  You only make that mistake once. 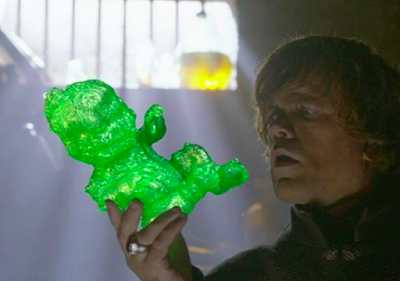