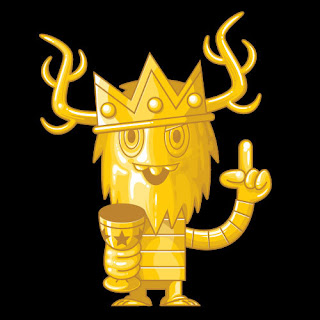 When I started this website I was just a naïve guy who wanted to be a part of something he loved.  I can't draw for crap and the best paint job I've ever laid down was courtesy of some weathered old lawn furniture and a can of Rustoleum.  But I could string together a word or two and using the inspiration that toys provided me I could feel that in some small way I was adding to their narrative.  Through stories about my cats or the ridiculous places I've managed to find myself in I could take an object and offer a different perspective that maybe the artist themselves hadn't even considered.  And hopefully at times it would be funny too.  It would be an exercise to not only keep me writing but to do so with purpose.  For years this website has hovered on the fringe of a movement  that was already fringe, so I guess that's fringe squared or something.  I really should have tried harder in algebra, despite the fact that I never did actually use any of that like they swore I would.  And before you go thinking that this is some farewell speech, it's anything but.  It's not about death but rebirth.

I've always stayed mum about the Designer Toy Awards, basically because my opinion was never really black or white.  While I may not feel that art really needs a gold trophy, it is not for me to take away the happiness that it may bring someone.  And I totally get the need to be recognized for your work as I think anyone who creates does.  So I've never pandered for a nomination nor have I ever posted a picture of the Toy King with a red circle and line through it with the words “No Masters” emblazoned across the bottom.  But the presidential race in America, with its Ringling Brothers meets Monty Python, meets House of Cards vibes, has inspired me to wipe the dust from my long dormant political side and jump feet first into this acid trip we call democracy.

Now I'm not here asking you to nominate me for a little trophy because I want to win it or because I think I even can.  In fact, the later would be kind of foolish, cause even though David slated Goliath, he didn't realize that Godzilla was waiting for him in the sequel.  No, I want you to nominate me because it's high time the pot got stirred.  It’s time that the status quo was turned into status no.  That original thinking replaced cut and pasting.  It's time to punch convention in the mouth, knock out a few teeth, and then surprise reveal ourselves as the dentist when they seek medical help.  What a twist!

Lets make one thing clear; this is not about wanting an award, this is about thumbing my nose at the same old same old.  Business as usual doesn't account for the unusual and that's who I want to represent.  I want to stand for the freaks, the misfits, the people who dared to have a dream in spite of the opinions of others and the obstacles they threw in your way.  This is for the lone wolves (I was going to say lone gunman, but that phrase hasn't had the best history with politics now has it) who were told “no” or “I don't get it” or “get out of here before I call the cops.”  And this is to recapture the excitement I had when I made my first ever post under that Toy Viking logo that cost me a case of beer and a meat lovers pizza.  When I committed to doing things differently because it was the only way I knew how and the only way that made sense to me.


The road to glory is long and perilous and I totally forgot to renew my AAA membership.