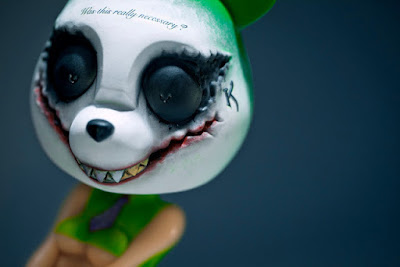 Let me tell you something, Fools Paradise does licensed toys like no one else.  I love to see a company take such well known characters and blow my mind with such a refreshing presentation.  How many times can you make just a miniature version of some dude that everyone knows and expect people to get excited about it?  The answer is apparently "infinite".

But enough bellyaching when there's this beauty to talk about.  It's equal parts cute, frightening, and irreverent, and thankfully looks nothing like the meth head Jared Leto version of the Joker that we're stuck with courtesy of the Suicide Squad film.  Ahhhhh negativity is like a bad burrito that just won't stop haunting me.

I really don't know any better way to describe this thing than to have you look at the pictures and try to wrap your own head around it.  You got a nearly naked hot chick with a Joker-styles panda head riding a miniature coin operated Batmobile.  Actually, that does sum it up quite nicely.  I may have a future in this yet.

You can preorder this beauty until July 13th by visiting http://doublefools.blogspot.com.  Only 380 of these will ever exist though, so get on it and own the greatest conversation piece a Batman fan could ever hope for. 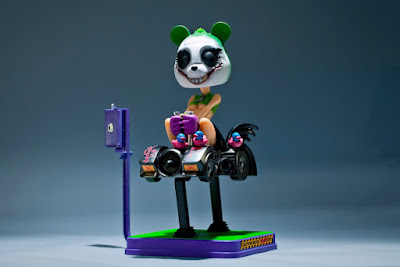 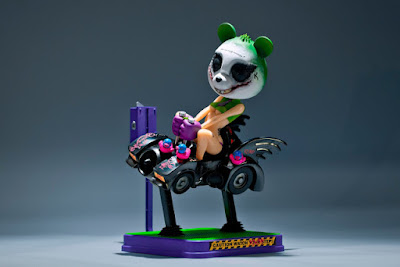