What if Mr. T and the TMNT Had a Baby? Dead Greedy Has the Answer For You 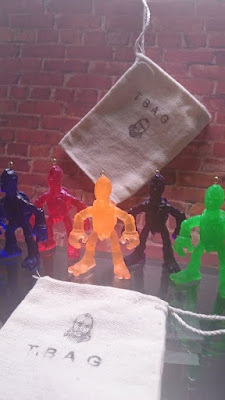 The scenario I described in the title of this post of course would depend on there being female ninja turtles, which is a spin off series I'm shocked no one has done yet.  It would be the perfect plan for Shredder to create chick turtles, thus distracting our heroes long enough to take over the world to the point that there's nothing they could do.  I am really underutilizing my skills as an evil genius.

My man Dead Greedy is so far ahead of the game though, cause he already had Mr. T swoop in and  woo the green right off of one of those turtle ladies with the promise of gold chains and massive amounts of the pitying of fools.  At this very moment you could snag yourself one of those mini Mr. TMNT in the color of your choice for $20, or get one of each (that's five total) for $75.  Or you could go much bigger, and get a sweet carded version painted up like Michelangelo for $50.  Take a gander at the madness over at http://www.shop.craptasticplastic.com/main.sc. 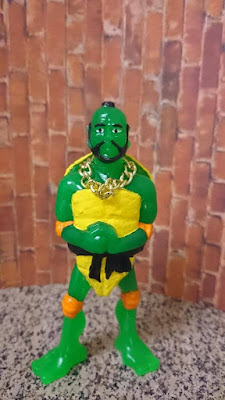