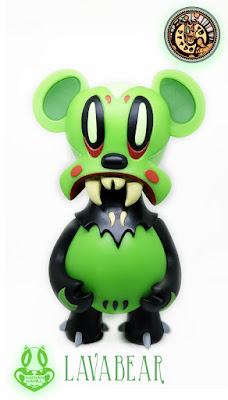 I've often wondered what it is my cats are up to at night while my wife and I are attempting to sleep.  I say "attempting" because we are usually woken up every hour by one of them needing attention, or so catastrophic noise from another part of the house.  They are so loud that if someone broke in they would probably get half of our stuff out the door before I realized it wasn't just another kitten stampede.  I'm gonna be heated if I wake up and I can't watch Wendy Williams talk smack on people while I eat my cereal!

One of the things I've wondered is how they react to the shear amount of toys in the house at night, especially the glow in the dark ones.  It's gotta be kinda freaky to be walking along, doing your cat thing, while all these little plastic figures are glowing all around you.  Maybe they think they're witches and are performing elaborate, albeit, noisy rituals to stop them from casting spells.  Or maybe they just don't give a crap one way or the other and are just having fun being as destructive in the dark as they can be.  It's probably that last one.

Nathan Hamill and 3DRetro are bringing an exclusive Lavabear to San Diego Comic Con that will glow in the dark and may or may not interest your cat.  The cool thing about this is that it doesn't have that sickly white coloring that most toys do that glow in the dark, so it looks just as nice in the daytime as it does while you're stumbling around with a baseball bat at 3am to protect your television from what may or may not be a prowler.  Only 75 were made and Nathan will be around to sign them on Saturday, July 11th from 2:30pm-4pm at the 3DRetro booth.