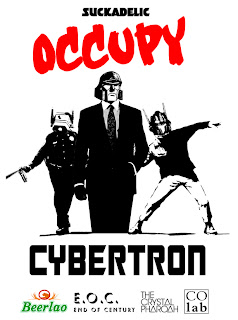 Everyone's favorite contestant from Work of Art is not sitting around and crying about his elimination from the reality show.  Instead he's being insanely productive and continuing his quest for ultimate world domination.  He's coming loaded with his classic bootleg figures as well as his first attempt at an 8 inch Mego style toy.  He'll also have miniature protestors and jewelry made by his girlfriend.  There will be a DJ, free trading cards for anyone in costume, and enough craziness to give you stories to tell for years to come.  So if you're not lame and in the New York area, you need to spend your December 7th at End of the Century from 7pm-9pm.
Posted by Chris at 5:00 AM