Here is a look at the new G.I. Joe Retaliation figures!  The movie comes out this summer and like the last one it will probably suck.  Oh, The Rock is in this one?  Forget all that I just said, it will ABSOLUTELY suck.  The lone positive thing about Hollywood ruining something that was sacred during my childhood is that there will at least be toys.  And these toys look pretty cool.  I especially love that Cobra Commander doesn't look like he escaped a burn ward wearing a fish bowl on his head.  They gave him back his metal mask, but updated it a bit which I really don't mind.  The Cobra Trooper has a cool World War 2 Germany thing going on, which is also a nice design.  The G.I. Joe Trooper however looks a little too much like Master Chief from Halo. 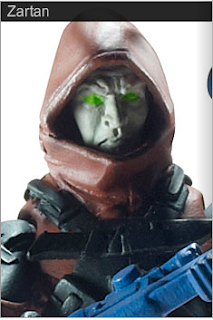 Another cool thing I'm excited about is the new Zartan figure.  Hopefully he changes color in the sunlight just like he used to.  I remember getting the original one, ripping him out of the package as soon as we got to the car, and placing him to bake on the dashboard.  At the time it was one of the coolest things a toy had ever done so I hope they preserved that for the new generation to experience.  Even though I'm sure they'd only be impressed if he could download music or update their Facebook for them.