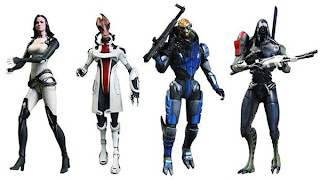 Now this is an interesting way to sell some toys.  The new Mass Effect line of figures will come with free downloadable content for the PC and XBox 360.  Each figure comes with something different to be used in Mass Effect 3 and the content will not be available anywhere else.  Four figures will be released soon with another four to follow later in the year.  Each one will cost you $20, but hard core gamers will most likely shell out the $160 for all eight if it gives them an edge.  Personally, I think it's a great tie in and I would expect to see much more of this in the future.  If they had done this for Arkham City I would have been at the store the day the toys were released.
Posted by Chris at 5:00 AM