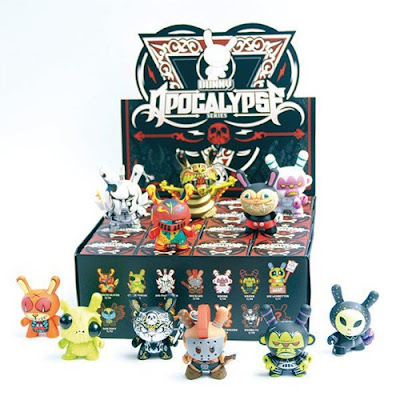 I'm sure anyone who is interested has seen these by now, but who couldn't do with a little redundancy in their lives?   This is the horribly kept secret know as the Apocalypse Dunny Series from Kidrobot.  Every single time there's a new set of these guys the same Spanish website manages to release the mock ups of them before anyone else.  This time the individual artists "jumped the gun" by posting pictures.  I put that in quotation marks because I'm not a big believer in stuff being leaked without a marketing plan behind it to build hype.  Call me cynical, but unless the factories are releasing the info it would be pretty easy to trace the culprit.

But who really cares about that crap anyway?  These figures look amazing and I want them all.  This series features designs by familiar names such as Huck Gee, Mishka, Jon-Paul Kaiser, Joe Ledbetter, Kronk, and Jesse Hernandez, while sporting some killer designs from new Dunny artists Chris Ryniak, Hydro74, and Jermaine Rogers (seriously overdue if you ask me).  No official release date, but it's time to start bugging your local shops to make sure you get in on it cause word is they will be very limited.