Well, we've been back from New York Comic Con for a few days now and I feel I have decompressed enough to form coherent thoughts about the show.

This year my wife and I were able to attend the Thursday "preview" day and it was a weird experience. There were a lot of people there, but not nearly the amount as usual because they only allowed the press and 4 day ticket holders in. So being able to move freely around the floor without having to elbow people in the heads was kinda weird. Friday definitely made up for that though, as the place was as packed as I've ever seen it. It made maneuvering a bit tougher, but the craziness felt right. Thursday I could buy anything I wanted but was kinda indecisive, but once Friday hit and people were clamoring for items I suddenly wanted everything as if it were a huge competition.

The highlight of the convention for me was getting to meet lots of new people and see some old friends that I only get to see once a year. I finally got to meet Peter Kato, Frank Kozik, Skinner, L'amour Supreme, Lou Pimentel, Erick Scarecrow, and Buff Monster. I bought toys from RealxHead and Uamou, who both made the trek to be there and finally snagged the elusive metallic Pop! Vinyl Batman figure.

The other highlight was watching guys staring at girls in skimpy costumes only for them to realize that they were actually dudes in skimpy costumes (surprisingly, this happened more than once).   The moment of realization on their faces is quite priceless.

It was overall a great time, and I can't even be mad about the ATMs breaking all over the place because that major snafu saved me a lot of money. But since I planned ahead I still left with tons of stuff. Here's a picture of all the stuff that came home with us: 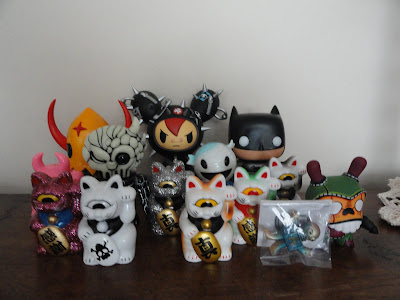 As you can see, we kinda fell in love with the lucky cats.  Let that new obsession begin.

Check out almost 300 more photos on our Facebook page www.facebook.com/TheToyViking
Posted by Chris at 8:37 AM