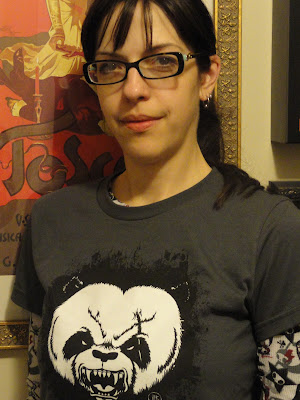 My wife decided that yesterday was a good time to debut her sweet Jon-Paul Kaiser x Outsmart Originals shirt.  Everywhere we went afterwards people kept asking where they could get one.  I'm not even kidding.  We couldn't go anywhere without someone stopping us to comment on her angry panda tee.  The best comment we received though, was when we went to see the classic American novelist Tom Wolfe at the Free Library in Philadelphia last night.  Yeah, in addition to collecting toys we're also uber book nerds too.  In fact, books may be the only thing we have more of.  So she gets up to the table to have one of our books signed and he studies the shirt for a minute before saying "I never thought about pandas having teeth, but of course they do."  This is the man that wrote The Electric Kool-Aid Acid Test and Bonfire of the Vanities waxing philosophical about the chompers of an endangered species.

Now I can't guarantee you'll look as fetching as my wife or that world renowned literary figures will be struck by a grand epiphany, but I can guarantee you only have until October 29th to order one of these before they're retired.  Go right now to http://www.outsmartoriginals.com/ and get one before it's too late.
Posted by Chris at 5:43 AM