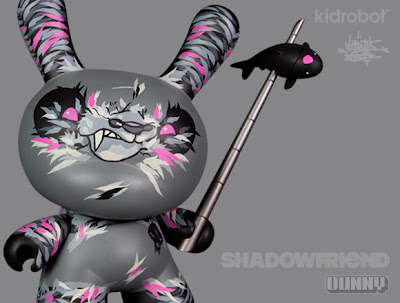 Does everyone already know about this?  Most likely, but hey, I'm not CNN over here.  I've got things to do and my kitties won't pet themselves.  This big ol Dunny was created by Angry Woebots (I see what you did there with the name you clever son of a gun you).  I'm on the fence about this guy and can't decide yet whether or not I'll try and get one.  I probably will because I'd rather regret spending the money than regret not getting one when I decide in March that I can't live without it and they're impossible to find.  Kidrobot only made 1250 of these suckers and they come out December 6th for $75.  They probably could have made the price a bit lower on this one because it's not sculpted at all, but I guess you have to pay extra for the dead fish and bamboo spear.  See, I'm already trying to talk myself back out of getting one.  I'm going toy schizophrenic.
Posted by Chris at 5:59 AM