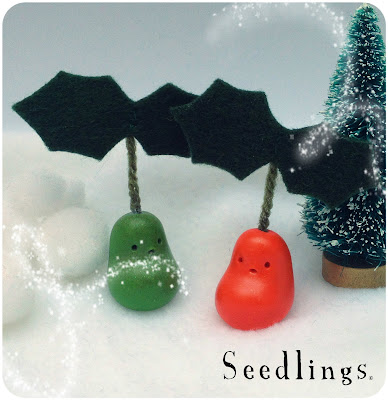 We were in a diner last night and were bombarded by Christmas music as we ate.  Now don't get me wrong, I like Christmas as much as the next guy, but Christmas music is the worst.  I think my problem with it is that the people that sing it seem like they take themselves way to seriously.  If you really listen they all sound like a bunch of snobs that probably wouldn't give you a ride to work if your car battery died and would only be interested about what you have to say if it directly involved them.  The only Christmas music I can tolerate is the Chipmunks, because those guys seemed like they would be down to bail you out of jail after a dizzying night in Chinatown.

But Christmas time is here and one thing I'll never be sick of are Christmas-themed toys, like these Seedlings from Taylored Curiosities.  For £12.00 you can pick either a red or green one and you get a bag of actual Christmas tree seeds, so you can grow your own and start a small business next year.  Go and get one before they sell out at http://tayloredcuriosities.bigcartel.com/.