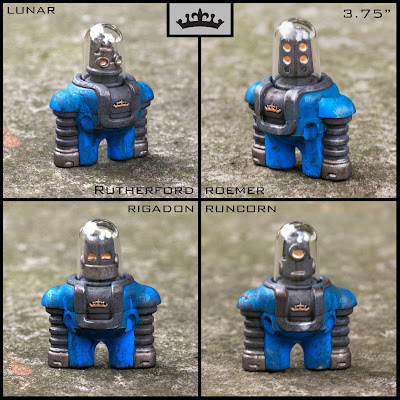 If you're into designer toys at all then you know all about the ratio of certain figures in a set.  Everyone wants the rarest figure they can possibly get, like maybe one of only 5 in existence.  It's why Dunny prices are so ridiculously high on eBay.  They less they make of something, the more desirable it is cause then someone else can't have it and you can be a jerk to them about it.  Well, I'd like to introduce you to the first time I've ever seen any toy maker offer you the ability to dictate how rare or prevalent a figure is.

Cris Rose is taking 20 orders for the figures you see above there.  Each person that orders gets to choose which figure he wants and that's the one that Mr. Rose will make.  So let's say all 20 folks want the guy on the upper left.  That means the other figures will never be produced in this color.  Or if only one person wants the one on the bottom right, then he's gonna have the only one in the world.  Yes, I know math is painful, and it made my head hurt a bit to, but it's a neat concept.  They go one sale today only at http://crisrose.bigcartel.com/.
Posted by Chris at 5:50 AM