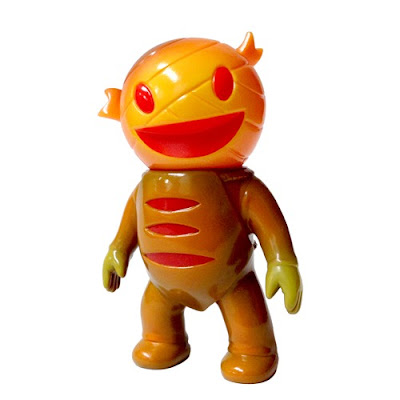 This toy kinda freaks me out for some reason.  I'm used to collecting the little pocket Mummy Boy figures and him having a man body all of a sudden is a little unnerving.  It's like when people Photoshop a baby's head onto a grown person and it gives you nightmares for a week about it chasing you through an abandoned mall when all you wanted to do was get a Cinnabon and look at the stupid crap that Spencer's sells but instead you have this baby headed man chasing you and its probably not to give you a helpful pamphlet about refinancing your home or to sell you Girl Scout cookies or to tell you about run on sentences that will probably make people mad and not want to read your posts again because they'll think you're on drugs and no one wants to support the insane ramblings of a junkie because that is like being an enabler .

If you're still with me after that mental lapse you can get this Mummy Boy/Drunk Seijin mashup to inspire your own nightmares.  He's $35 and for sale right now on the Super7 website.  I have to go lay down.