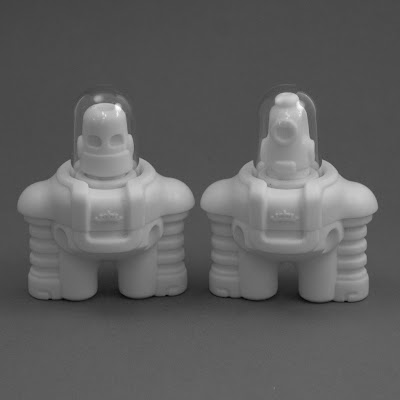 If Cris Rose has his way, the world will be taken over by robots.  Thankfully for us, the robots he creates are only looking to take over you toy shelves and not harvest us for use as batteries.  These are Lunar Sprogs and stand almost 4 inches tall and come with a removable dome.  Of course that's not everything about them, as any good toy has a good story to back them up, so I'll do my best to tell you the tale.

Ok, so about 2 million of us people folk are living on the moon.  Probably because of global warming and the terrible lack of polar bears.  But anyway, lots of activity takes place outside of the biodomes we have created as our habitat.  I mean, you can't just cover the entire moon in a glass shell, especially not with union wages being what they are.  So you need helpers that can go out onto the moon's surface and help you out when you're in a pickle.  Say, your car breaks down, or your cat gets loose.  Well, someone has to go out there and take care of these things.

Each one of these guys also has a personality as distinct as his looks.  Pick up your favorite handmade Lunar Sprog  for only $75 when they are officially released.  Keep an eye or two on http://crisrose.tumblr.com/ for more info. 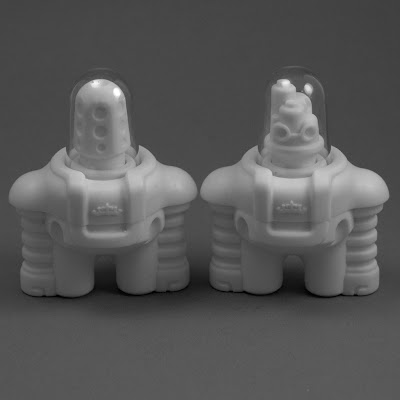