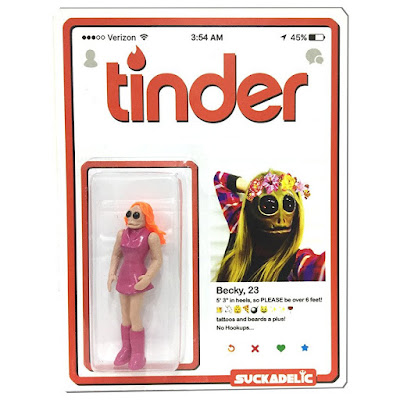 I don't know how people do the whole on line dating thing because anyone with any form of social media sees just how people manipulate their photos to look completely different.  Whether it's using extreme angles or downright Photoshopping unflattering areas, no one ever looks in person how they do on the internet.  The best is when someone you know in real life friend requests you and you can see their foul witchcraft first hand.  You know your coworker looks like a Kardashian (still yuck) on line but like The Iron Sheik in person.

The Sucklord is always in the moment with his new releases, and he has captured that trickery with his latest figure, Becky 23.  She thinks she's from the Land of Coachella but in reality she looks like she just crawled from a cave in Land of the Lost.  Her old Sleestak face won't stop her from being uber picky and judgmental about her potential suitors though.  You gotta moisturize that reptile skin, boo boo if you're gonna keep such high standards.  Pick her up now from www.suckadelic.com, but make sure you have plenty of pumpkin spice in case she gets cranky.  That stuff is like a tranquilizer dart for girls like this.