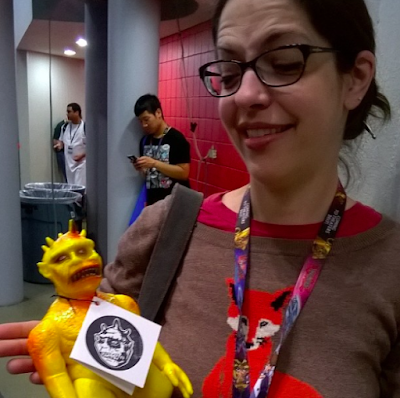 Another New York Comic Con has come and gone and nothing could sum it up more perfectly than this picture.  For one, my wife's face perfectly depicts how she felt about the things I bought (she has grown to love the Cinema Monster from Splurrt).  And she also spent a lot of time waiting outside of bathrooms as I tried passing a kidney stone for two days (of which I was successful on the second).  Here are my thoughts about this year's version of the convention:

1.)  This is the first time I've ever waited in a line that was wrapped around an entire city block.  It wasn't unpleasant though, cause it moved rather quickly and the faces of the people that were part of the SECOND coil around the building really put our situation into perspective.  Literally, the line to get in wrapped around twice.

2.)  I was able to get everything I wanted and then some, which is easier to do when you cut your want list down to just a few things.  Sharon is pictured with my major score of the convention, which I still can't get her to kiss on the lips.  For some reason, she doesn't like fun.

3.)  Twelve year old me lost his mind when I got to meet Ric Flair and Animal from The Road Warriors.  I resisted all urges to yell "Wooooooooo" unlike everyone else who passed by.  Instead, I just acted awkward, which I've determined is my finishing move should I ever become a professional wrestler.

4.)  I used the restroom at the Javitts Center more on the second day than I have collectively in the years I've been going to Comic Con.  I also lost more blood than I ever had in the most inglorious fashion.  But I feel pretty good that somewhere in the sewers there's a rat that found my kidney stone and has added it to his pile of treasures, possibly worshiping it as a gift from his rodent deity. You're welcome, little dude.

5.)  New York smells weird.  Not like bad weird, unless you pass over one of those steaming grates that smell like someone is deep frying excrement.  Or if you step in one of those puddles that seem to hang around even if it hasn't rained in a while and they're a strange color and pretty much force you to buy new shoes.  That's bad weird.

6.)  It may just be me getting old, but I don't know how people make it through all four days.  I went for two and was ready to stop at the emergency room on the way home (and not just because of the blood pee).  I think next year I may get a gym membership and get swole before we go so my muscles don't feel like they hate me.

7.)  Dunkin Donuts is my favorite food group.  I probably shouldn't have put this right next to the one about being out of shape.

8.)  I got to meet lots of cool folks that I've known for a long time on the internet but never met in person.  I won't mention them in case they didn't actually get permission from their parole officers to be there.  I don't snitch.

That pretty much sums up my Comic Con experience.  If you'd like to see pictures of all the really cool stuff I saw you can do that by heading over to www.facebook.com/TheToyViking.