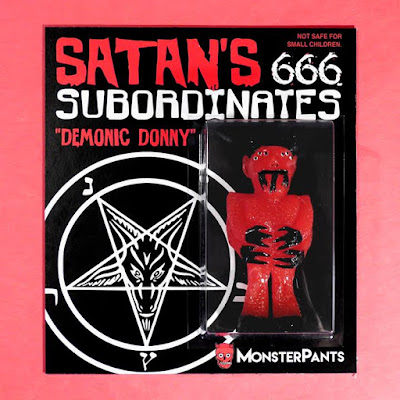 And you thought you had some bad jobs in your life.  Could you imagine having the actual devil as your boss?  Good luck trying to update your Facebook status in the bathroom, or stealing office supplies for your at home craft projects.  Dude runs a tighter ship than a dolphin's butt and one that smells equally of digested fish.  Speaking of which (not butts, you freak, bad people to work for) Sharon and I were riding the train home from Comic Con and the dude across from us was watching footage of the employees of his restaurant on a tablet.  He was spying on the cooks, the wait staff, even zooming in on the diners as they ate.  That's the type of stuff you have to do when nobody respects you or realizes you're a licensed gun owner.  There's too much good tv on to be worrying about whether or not someone is trying to sell the cooking wine to the sketchy dude that hangs out back.

Monsterpants has amped up his resin productivity and has another new release waiting for you in the form of Demonic Donny.  He's doing the devil's bidding whether he likes it or not and if you were to ask him his job satisfaction is through the roof!  And it's still a better gig than working with children.

Add this employee of the month to your collection by visiting this link. 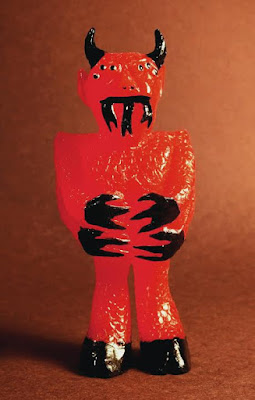 Email ThisBlogThis!Share to TwitterShare to FacebookShare to Pinterest
Labels: Monsterpants