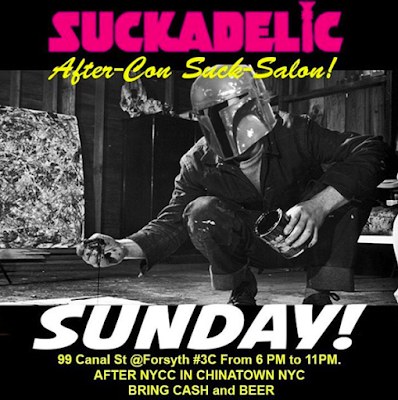 I could only go to New York Comic Con for two days, which is plenty for me because I felt like I was training to become a cage fighter by the end.  How do people make it through all four days?  My legs hurt, my mind is completely overloaded by all there is to see, and I crave the normalcy of cleaning litter boxes and wanting to kill myself while working with the public.  Familiarity is the meat of the hamburger of life.

I met the Sucklord at Comic Con and he told me about this shindig he was throwing that is gonna involve adult beverages, and toys, and probably some pictures you won't be able to post on any but you're most secretive of social media.  And you can buy stuff, which is the best kinda party there is.  Think about when your mom used to go to Tupperware parties and she would be all turnt up and let you stay up to watch Nick at Nite until she came home and the babysitter was mad cute in a "Who's the Boss" era Alyssa Milano type of way and you would try to do stunts to impress her cause you think that's how you get a wife?


Tons of stuff will be for sale, and by tons I mean anything you can get on the subway or in a cab or an Uber.  Cash is king and you can be too with all your new Suckadelic stuff.  The details are in the photo, so you should go and create memories that will last a lifetime/until you sober up.
Posted by Chris at 7:47 AM