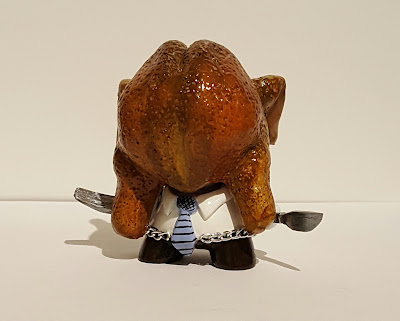 Raw chicken and turkey are about the grossest things on the entire planet and I refuse to touch either.  I won't even touch it while it's safely wrapped in the package, that's how much I hate it.  I love it once it's cooked, but until that point I want to have absolutely no interaction with it.  If you have a venomous snake loose in your house, or if you need a someone to take a look at the dead thing you found feel free to call me.  But if your problem involves uncooked poultry I am not the man for the job and I feel no shame in telling you so.

The above paragraph has probably done its job in letting you know that I am no expert when it comes to preparing a bird, but I'm pretty sure I've never seen anyone season a turkey like this.  I haven't watched the Food Network in some time and it may be a new technique, but I feel comfortable in stating that there has to be a better way.  The Angry Artist has opened up preorders now for a run of custom Dunny's that have gotten a little too involved in the Thanksgiving festivities. There's always one in every family who just takes things over the edge (I'm looking at you, Uncle Ted).  They're limited to only 10 pieces and available for preorder right now at http://angryartist.storenvy.com.