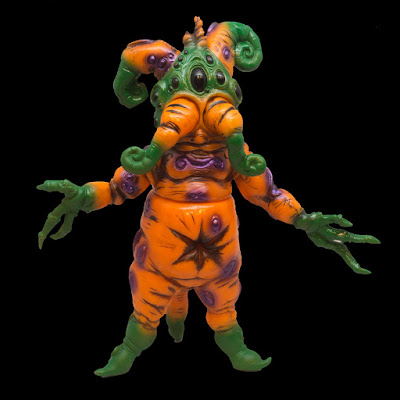 The real mandrake root that this toy is based on is shaped like a little person and will supposedly make you trip until that band Phish is listenable.  I don't know why anyone would want to lose control to the point they're enjoying jam bands and I sure as hell wouldn't eat some human shaped yam for dinner, so the mandrake root really has no place in my life.  Plus, they don't sell it at Wal-Mart so I wouldn't even know where to get one.

Halloween is the best time for toy releases because everything is guaranteed to be in a color scheme I like.  For example, this toy right here from Doktor A and Toy Art Gallery.  He's decked out in a perfect paint application for the season and he even comes with a little friend to do his bidding/grocery shopping.  What does an evil yam buy at the grocery store anyway?  Root shaped people?  Did this just turn into a Twilight Zone episode?  And speaking of the Twilight Zone, how come every time they air one of those marathons I only see the same ones over and over again?  There's a trillion episodes and no matter when I turn it on it's William Shatner freaking out on the plane because there's a diseased monkey on the wing.  Am I in the Twilight Zone while watching the Twilight Zone?  It makes my head hurt just thinking about it.

You can pick this guy up beginning Friday, October 28th at noon pacific time from www.toyartgallery.com. 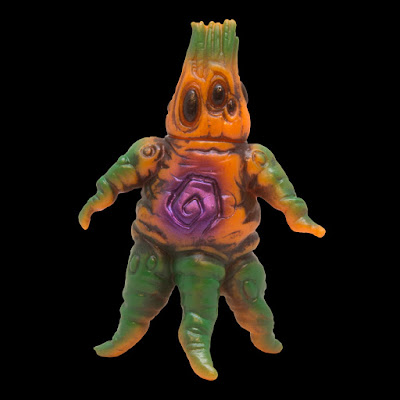