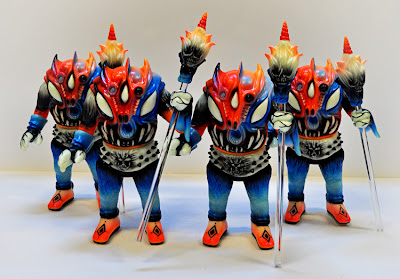 I've got two old Pinky and the Brain vinyl toys laying around that could use a good sprucing up.  I bought them at the Goodwill for 50 cents apiece and they're kinda dirty to the point that I don't want to know what happened to them.  But I couldn't just leave them there for some little kid to let his dog chew on and then eventually end up in the landfill.  I was gonna paint them to look like they had formed a black metal band but the closest I got to that was putting them in the dishwasher and then leaving them on the kitchen counter, where they are still sitting.  Now if life had turned out differently, and I was blessed with more artistic ability and less with shampoo-commercial hair, then maybe I would make them look like this.

Skinner is at it gain, painting up toys and offering them up to the hungry masses.  he could paint a Dora the Explorer doll and I would want to buy it, so it's no wonder I want these.  They started out as Pollen Kaisers from Paul Kaiju and were then transformed through paint and pot smoke into Dead God Narcotics.  You want it to tell you all its secrets?  You know it has some.  Well its gonna cost you $400 today at noon Pacific time to learn what black magic these guys could conjure up.   Be one of the lucky 4 people in the world to own one by going to http://shopcriticalhit.com/.
Posted by Chris at 1:00 AM