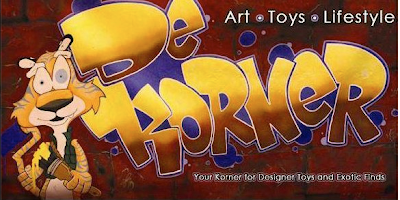 Last year when the Deathshead figures from David Flores were revealed I knew I had to have one.  So I waited for any store to offer preorders and DeKorner was the first.  I couldn't order that sucker fast enough.  Now the figure had some issues at the factory that caused it to be delayed for quite some time (to the tune of almost 6 months) but that made it even more exciting when it finally arrived.  I tore open the box and to my confusion the figure was wet.  Weird.  I inspected closer and determined that it was coming from one of the feet.  So I popped it off and saw that the substance that they used to balance the figure had not properly dried, leaking some unknown substance all over.  Ok, no big deal, I just have to figure out how to dry it.  I tried everything, from letting it sit out for days to using a hair dryer.  I even posted photos online and asked for help.  Contacting the manufacturer was a wash because they hadn't updated their website in over a year (I still haven't received a reply).  So I contacted DeKorner to see if they had any ideas on what this stuff was so that I could repair the figure.  They were able to contact the distributor and get me an entire new piece at no cost.  I was pretty stunned to say the least because I never would have expected anyone to do that. I was going to write them a thank you note privately but I thought other people needed to know how cool my experience was.  Check 'em out if you haven't already as they get a ton of exclusive stuff and they really go out of their way for their customers.
Posted by Chris at 6:08 AM