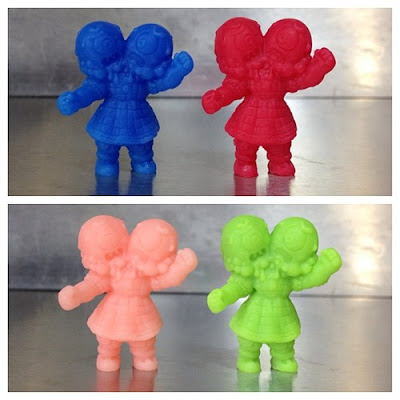 It would suck to have two heads.  What if one of the heads had really bad breath and the other head never got any relief from it?  Or one of them insisted on trying hats on, caught head lice, and gave it to the other?  You just know one of the heads would be a filthy jerk like that.  I'm sure you could strike a pretty cool reality tv deal, but it just seems like a hassle to me.

You may remember this toy in its original incarnation as Double Heather from the Garbage Pail Kids.  Well, Buff Monster changed her up a bit to include two of his signature ice cream scoops as heads and then had Healeymade cast them in resin.  These 4 versions will be available tomorrow through Buff Monster's website at www.buffmonster.com.
Posted by Chris at 6:47 AM