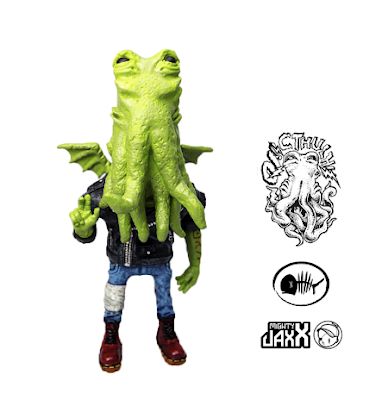 I've actually been reading H.P. Lovecraft on my breaks at work, so is it strange that this toy is released at the same time that I began the book?  Have the planets aligned and the words of the Nekromonicon been spoken?  Are the Elder Gods returning to wipe mankind from the face of Earth?  It could happen.  What better way to stay safe from the wrath of this monstrosity than to purchase this figure and give it a place of prominence in your home.

Daniel Yu decided that Cthulu would probably be a huge fan of punk music.  How he came to this realization I'll never know, but I'm glad he did and that Mighty Jaxx was willing to capture it in 3D form.  Each of the 300 pieces is cast in resin and then hand painted.  If you buy it directly from Mighty Jaxx it will also come signed by the artist.  Get one now or risk eternal torment and stuff.