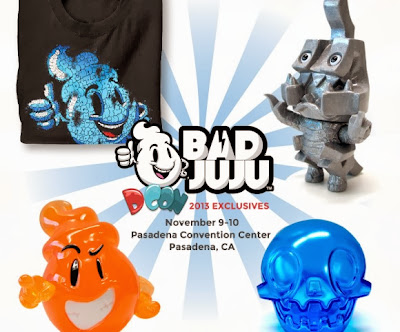 Normally, I'm an avoider of anything that might contain bad juju.  Monkey paws, voodoo, Miley Cyrus albums; the list is pretty extensive.  It's served me well as I have yet to be possessed by any evil entities, other than that time I ate at Golden Corral's buffet and it felt like were trying to escape me sideways.  I don't care how affordable that food is, don't eat there unless you have a priest and a port-a-potty next to you at all times.

Bad Juju Brands is out to change how I feel about those two little words that invoke caution of supernatural proportions.  Like everyone else in the world but me, they'll be at Designer Con this weekend with a ton of exclusive stuff that you're gonna want.  Let me tell you about two of my favorites.

Numero Uno:  The Orange Dripple resin figure from Sket One.  You know resin is looking good when you wonder what it tastes like, cause that sucker looks like candy.  Now I don't recommend you go around liking your toys because for one you'll look like a crazy person, and for two they might be toxic.  But hey, who am I to stop you from having a good time?  They made 100 of these little dudes strictly for admiring with your eyes and not your mouth.

Numero Dos:  The Clear Blue Calaverita by The Beast Brothers.  Anytime I see anything in clear blue from now until the end of my days all I will be able to think about is Breaking Bad.  It's infected my blood.  Don't try and smoke this skull though for the same reasons I already listed above.  Only 30 of them were made so be quick about it if you want one.