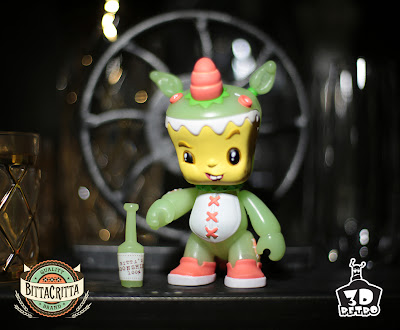 If the lights happen to go out at Designer Con, signaling the fact that North Korea has finally invaded us, then the 3DRetro booth will be the safest place to run to, as their whole booth is gonna glow like Three Mile Island.

First up, we have the special glowy MoonSHINE Edition of Scott Tolleson's Bitta Critta.  Little known fact about me:  I'm not actually from New Jersey, I just live here now.  I actually grew up in Virginia, and whenever anyone learns that they all want to know a.) do I watch those moonshine shows on tv and b.) can I help them make some.  The answer to both of those questions is surprisingly no, though the second one does sound exciting.  I could be the Walter White of New Jersey party juice.  The figure will be $50, while hiring me to build you a still will be substantially more as soon as I Google how to do it. 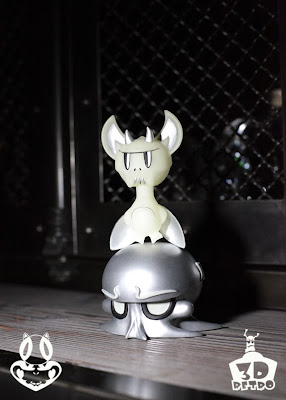 Also something that may come as a shock to you is that I don't have any good stories involving bats or human skulls.  I do get a kick out of the giant fruit bats at the Philadelphia Zoo, as they look like foxes with wings.  That is cute and also horrifying at the same time, because what if foxes learned how to fly?  And then the coyotes would learn, and the wolves, and we would be getting dive bombed by predatory mammals on a daily basis.  And you think getting pooped on by a bird is bad, a wolf poop dropped from high enough could probably give you a concussion.

This is of course Strife and Sire from Nathan Hamill.  These two guys glow too and are also $50.  I'm detecting a distinct theme here.  Nathan will also have prints available that he collaborated on with Pronto Pixel for $30 that are ready to snazz up your living space. 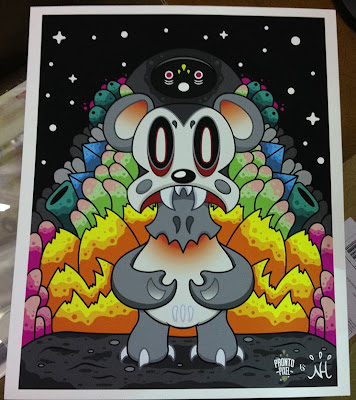