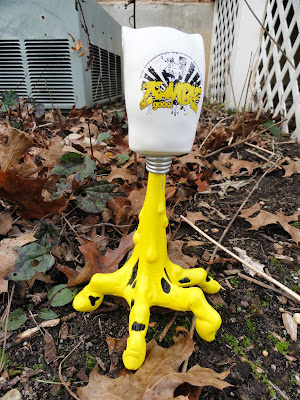 Look at me gettin all outdoorsy for this review.  You would think I was working for Bass Pro Shops or something.  Benny from Tenacious Toys asked me for my address the other day and since I've met the guy in person before I wasn't too concerned about what he was gonna do with that informations.  So I've waited patiently, not knowing whether to expect a box in the mail or a hit man (I get paranoid sometimes).  Luckily for me, it was the former and it was filled with exclusive toys that you can only get from Benny himself.  Now I shall share with you my thoughts on them.  Prepare yourself.

The first picture you see up there is the Zombie Goo New York Comic Con Biohazard Edition.  You will also notice my heating and air conditioning unit on the left.  I never claimed that I was Annie Liebovitz.  VISEone is the man behind this toy that looks like it stepped (or crawled) straight out of a Stephen King novel.  In fact, I'm surprised he hasn't written a story about tubes of products that come to life and kill you.  Just think, you're going to brush your teeth one day and a hand reaches out from the tube and starts attacking you.  And there you are, just trying to prevent gingivitis.

It's a really weird toy to say the least, but I mean that in a good way.  It's weird because most designer toys are some sort of full fledged character, where this one is more like a snap shot of terror captured in plastic.   Does the rest of the zombie eventually come out of the tube to eat you, or is this his fully realized form and he's just as deadly the way he is?  There's a few different ways to look at it and maybe it will inspire someone to write a good story about it.  It pushes the boundaries of what a toy can be and that makes it an interesting piece.  As a bonus, the box also comes signed by the artist, which is cool because he lives in Germany and mailing big toys back and forth (it stands 8 inches tall) isn't cheap.  But you can get the whole thing right now for only $40!!! Try and get a designer toy this big anywhere else for that price, I dare you. 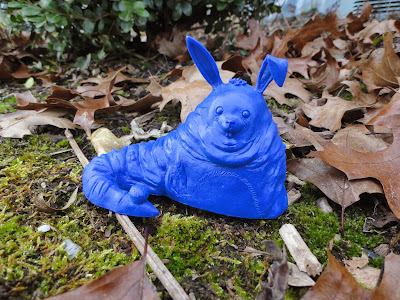 Alex Pardee's Bunnywith character has had a lot of ups and downs.  He's been transformed into everything you can imagine, and this time he has taken the form of one Jabba the Hut.  I've seen this dude online before but never in person, so I was kind of shocked at how big he was.  I thought that he was the size of a M.U.S.C.L.E. figure, but this is him sitting next to a 3 inch Dunny: 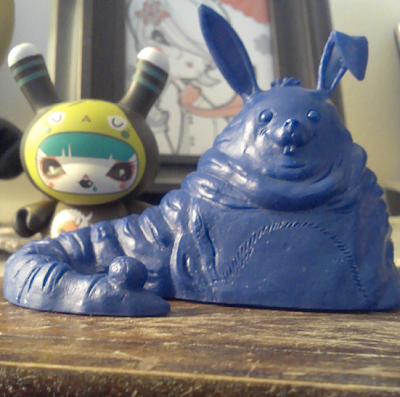 That's a lot of intergalactic slug for only $12.  This is the perfect toy if you're a Star Wars nerd, a bunny nerd, a plastic Star Wars bunny nerd, or if you just fancy the color blue like Winona Ryder in Heathers: 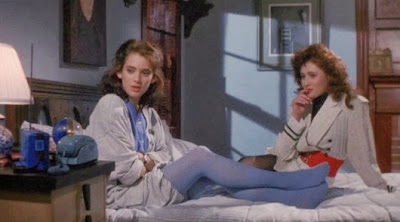 I wonder if she'll see this.  If so, Winona, you have now made my life complete knowing that you have read these words.  If not, I just sounded like a weirdo for nothing.  But hey, at least I have a cool toy to look at right?  And you can too if you would accept Bunnywith into your life in exclusive Tenacious blue. 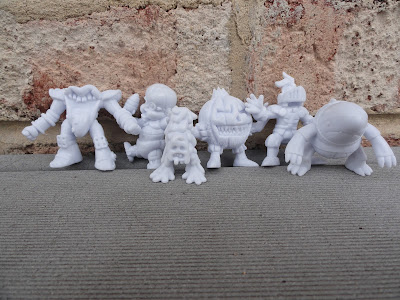 I changed it up a bit in this picture and lined all these little dudes up on my porch.  I try to keep it unpredictable, so you'll come back everyday just to see what kind of shenanigans are going on.  Plus they wouldn't all stand up in the dirt without me burying their feet and getting them filthy.  I'm trying to keep these guys as pure white as possible.  This is the Tenacious exclusive white OMFG series 2 figure set.  Though you don't have to leave em plain if you don't want to.  Paint em up and make em look fancy.  I just know that I don't have the required steady hand to paint something this small without making them look like Marilyn Manson caught in a rain storm.  There's 5 figures total but I decided that the knight's puke could stand alone as his own dude, so if you agree with me then there are 6.  What's great about these guys is that even though they're small they pack a lot of detail, which is something that toys this size aren't always able to do.

Well there you have it.  I think I kept on topic through most of it, which as you know is hard for me to do.  All of these are available as we speak at www.tenacioustoys.com.  So go on, treat yourself to something nice.  You work hard and deserve it.