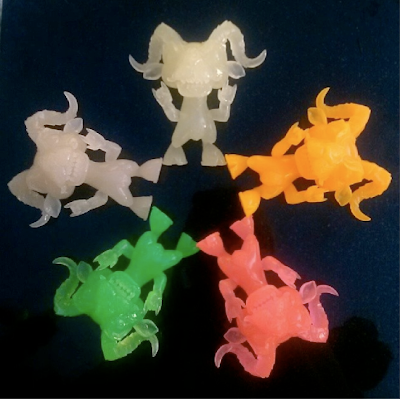 If the Discovery Channel still aired shows that were informative, and not just crap about people never finding gold, or that Amish Mafia nonsense (really, as soon as they open their mouths I can't help but laugh, so who are they scaring?)  then you would know that all goats listen to metal.  It's proven fact, you can go and ask Sir David Attenborough, whose controversial documentary "Head Banging Farm Animals" is hard to find, but highly informative.

Seriously Silly K didn't invent goats, or heavy metal, but she did create a stunning tribute to both in her Sinner figures.  Word has it she won't be making too many more of these, and once the head mold breaks, she plans to retire it.  So you better get on the ball tomorrow when she releases these limited glow in the dark versions.  You can sit them next to you in the dark while you listen to your Judas Priest records backwards to learn Rob Halford's secret pumpkin pie recipe.