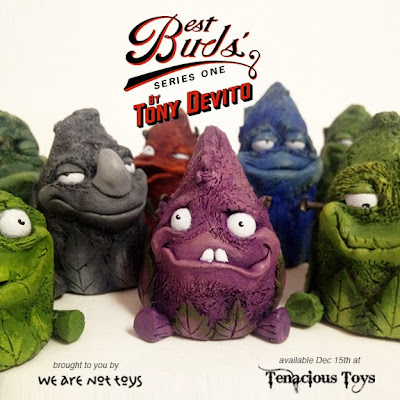 The fact that I'm posting about these toys will probably disqualify me from ever holding public office, which is fine because all politicians are crooks.  If I wanted to be a thief I would just go hold up a 7-11, which would definitely end any future presidential bids.  I can imagine the other candidate and I debating on tv, when the moderator asks if I would like to address the time I wrote about those weed toys on my little internet site.  The audience would gasp and I would be forced to live in seclusion on a reindeer farm in Iceland.  Which actually doesn't sound that bad.  Speaking of Iceland, I bought my wife a necklace with a piece of lava rock from there and it only cost $1.90 to ship it to me and I got it in five days.  I can't even mail something 100 miles away in the United States for that price.  We must learn their secrets.

Break out your Doritos and Iron Butterfly records because Tenacious Toys is releasing this Best Buds resin series from Tony Devito and We Are Not Toys tomorrow as part of Super Series Sunday.  There are 15 original figures in this series, each with a gold, silver, and bronze chase color and random golden tickets that can be redeemed for cool stuff.  Get one blind box for $29.99 or guarantee a whole set of 15 plus a mystery figure for $420.  They go on sale tomorrow, December 15th at 6pm Eastern time only at http://www.tenacioustoys.com/.

Email ThisBlogThis!Share to TwitterShare to FacebookShare to Pinterest
Labels: Super Series Sunday, Tenacious Toys, Tony Devito, We Are Not Toys