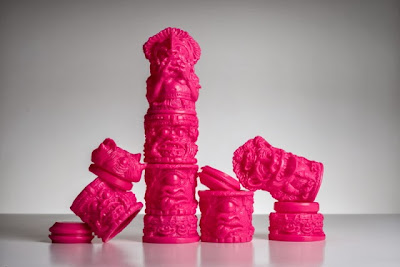 Sharon and I recently started rewatching that show Millennium that was on in the '90's with Lance Henriksen and last night we took it too far.  It was like that episode of Portlandia, when they marathoned Battlestar Galactica and then everyone lost their jobs cause they couldn't stop watching it.  Before we knew it the clock struck 1 am and I felt like death.  Normally, I'm pretty coherent until about 11:30, then my body decides it has had enough and starts to shut down.  I forget how to speak english, I start that weird half awake/half asleep dreaming, and the stairs to the second floor become an insurmountable obstacle not unlike Mt. Everest.  But the show is soooooooooooo good.  The moral of the story is that this looks like something that Frank Black (who is played by the aforementioned Mr. Henriksen) would find at a crime scene and lead him to the ultimate psychological battle with a serial murderer.

This is a Totim and it was created by Tim Clarke.  If you grew up when I did you know Tim's work, cause this dude made some killer toys, like Boglins, and even worked for Jim Henson making all kinds of critters you would instantly recognize.  He and Toy Art Gallery put their heads together to produce this interchangeable toy that lets you reorganize the parts to suit your mood.  Each piece is double sided so you have a bunch of possibilities when it comes to how it looks.  This pink edition goes on sale Tomorrow, December 4th, at noon Pacific time at http://shop.toyartgallery.com/.