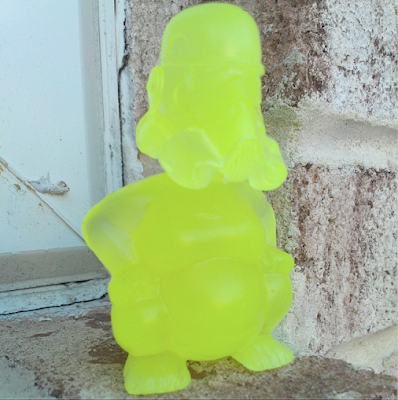 It always surprises me that sumo wrestling wasn't invented here.  We invented Burger King, stretch pants, and the Wing Bowl, which packs 20,000 into a stadium to watch people eat chicken as fast as they can.  Sumo seems like a no brainer.  But, since this is America, if we didn't invent it we sure as hell are gonna improve on it.  How much more awesome would sumo wrestling be if everyone wore Storm Trooper helmets?  That's a trick question because it is a known fact that everything, no matter what it is, is more awesome when Star Wars characters are involved.  Try and find something that's not and I'll make sure to send doctors to your house and declare you legally dead.

Kris Dulfer of Kid Ink Industries is doing his civic duty by banging out these Sumo Troopers.  These little resin dudes are insane.  He hooked me up with this one while back and I love it.  I took him outside today for a while to really charge up his special glow feature and that sucker was so bright I'm thinking about throwing my lamps out and just getting a bunch of these. 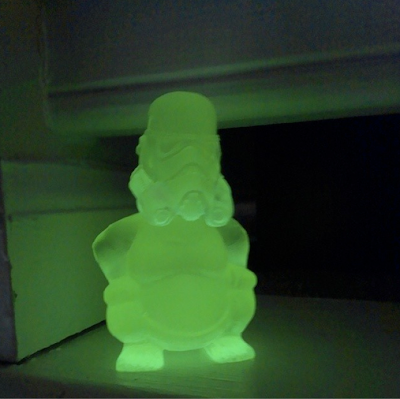 Look at that dude shine!  It may be filled with magic, I dunno how these things work.  I'm just a simple toy bloggin bro.  What I do know (see how I just transitioned there?  that's called literature son) is that he just loaded his store up with a bunch of one-offs of these.  There's all kinds of different colors to pick from.  All you gotta do is go to http://kidinkindustries.storenvy.com/, pick one out, and place your order.

If you've never owned a hand made toy like this you're really missing out.  There's no factory or heavy machinery involved, you're buying a piece of art directly from the artist.  There's just a different feel about them when you realize the hard work that one lone person did to make this happen.  Kris is a master at his craft and his pieces never cease to blow me away, and they're even better in person.