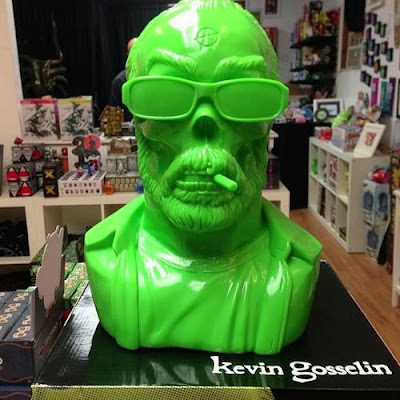 I would think that it would have to be a weird feeling to have someone make a toy of you as a corpse.  I'm not sure my wife would want a Dead Chris bust, but that might be because I told her I was gonna haunt her if I die first.  Nothing major like Poltergeist or anything, I would just try to keep up the level of annoying stuff that I did while I was alive.

Kevin Gosselin has paid tribute to the future insect buffet of Frank Kozik in this limited edition bust.  Suburban Vinyl has got this exclusive green version that is limited to 50 pieces and will cost ya $200.  I think he would look lovely next to grandma's urn.