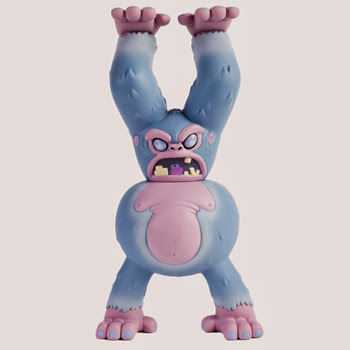 And now for something completely different.  By you seeing this picture, you have officially seen more yeti than any of those stupid tv shows that try to hunt them down.  How is that even enjoyable to watch?  Oh look, some hillbillies are gonna throw snack food all over the forest, then sit around and get excited at every single noise they hear.  "Did you hear that?  Let's run really fast and make the camera all jumpy, find nothing, then go on and on about how we just missed it."  Repeat this 13 times and you have an entire season of television.

Pause Designs made a custom yeti for a client a few years back where they flipped a Dunny over, glued his arms to his feet, and made a terrifying snow critter.  Kidrobot liked it so much that they actually put it in to production and you can buy one tomorrow.  It's a weird design to say the least, and it's taken me some time to wrap my head around.  I applaud them for taking such a risk with their iconic Dunny platform, and I applaud them even further for making this one more affordable at $59.99.  They've been more willing to push the boundaries with sculpted details before, but this is the first time that the original figure is almost unrecognizable.  It makes me excited to see what they will do next.