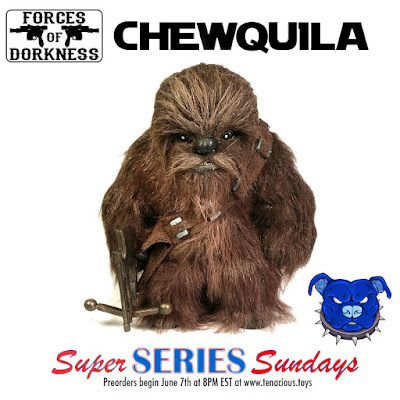 I know I've already told the story of how mad I got while trying to get a new tire yesterday, but I was sooooooooo ma that it bears repeating for a second day in a row.  I won't retell the whole thing, but do you remember in Star Wars when Chewbacca was about to lose that weird game of chess and Han Solo was all like "bro, you should let the Wookie win, cause he'll rip your arm off and cave your skull in with it" (I'm paraphrasing)?  Well I was Wookie level angry yesterday.  I mean, where else can you set up an appointment to have something as simple as a tire replacement done and they tell you it might be done by tomorrow morning?  Could you imagine showing up to your barber and him telling you that he got really backed up and he may get to you by morning? Or booking a reservation at a restaurant for dinner and not being seated until breakfast.  It's ludicrous, and it's even more so when they don't understand why you feel that way.  I can hear George Castanza yelling about this in my head.

Ok, I think Forces of Dorkness has officially made it impossible for anyone to create a better custom Star Wars toy.  He took a Muttpop Tequila figure, fuzzied him all up, and made the mother of all Chewbacca figures.  Eight of these will be made available this Sunday (June 7th) at 8pm as part of Super Series Sunday from Tenacious Toys.  You will have a two week window to preorder one of them after which time they will be made and mailed off to live with their lucky new owners.  Little pink hair brush not included.
Posted by Chris at 6:21 AM