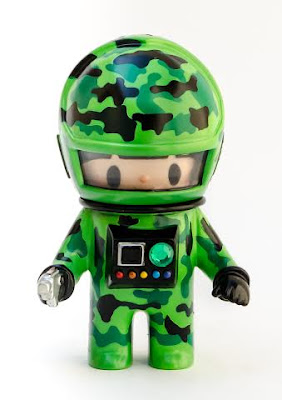 **UPDATE**  There's also going to be a cammo version available.  Now, camo ain't easy to paint.  You can't just wish it on there, so as a result this guy will be $45 to reflect the hard work.  But look at those results; they're totally worth it.  All the other release info is the same.

I met Buzz Aldrin once.  He's the only astronaut I've ever shook hands with, and that's the only astronaut story I have.  He seemed nice, and I'm pretty sure I could have whooped him.  Is it weird that I thought about whether I could win a fight against an 80 year old man, or awesome that I am willing to take on a space traveler and moon adventurer?  When you put it like that it makes me seem kind of heroic.

Vinyl Pulse is celebrating their 10th year of writing about designer toys, which is a pretty long time when you think about it.  Some cars don't even last that long, so you gotta celebrate a milestone that big with something special, like this exclusive Astronaut from Itokin Park.  He's decked out in colors from the website and will go on sale this Friday, June 19th, at 7am pacific time from www.vinylpulse.com.  Each 3 and 1/2 inch figure will be $35 and guaranteed cute as hell. 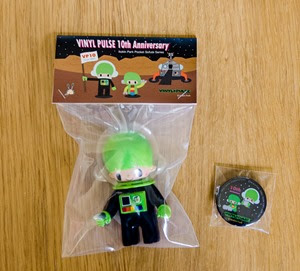