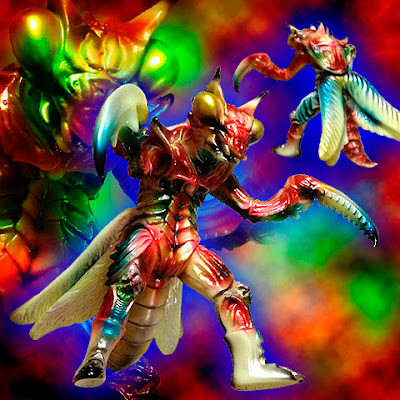 I get that doing lotteries for popular toys is a decently fair way of selling a limited product while being able to weed out known flippers, but like any gamble it sucks when you don't win.  Which is why I limit my gambling to crane machines and skee-ball.  None of that casino nonsense for me, I'll stick to my carney games where the stakes are low but the prizes are much better than mere cash.  You can always make more money, but you can't always get another giant stuffed banana dressed as a Rastafarian.  Every time you see that beauty sitting in the corner you'll be filled with a renewed sense of pride, while everyone else who sees it will wonder why you brought that thing home instead of leaving it at a rest stop where it "obviously belongs."  Playa haters.

Blobpus is forgoing his usual lottery sales for this release and instead ensuring that everyone who wants one of these crazy Mantis figures from Dream Rocket can get one.  You have until July 6th to order one, at which point he will paint them all up and ship them out in December.  Get complete details by visiting http://blobpus.blogspot.jp/.
Posted by Chris at 5:20 AM