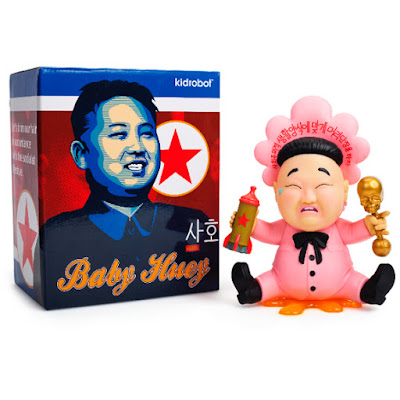 Being a sadistic dictator has never been more adorable!  Check out Frank Kozk's take on North Korea's supreme ruler with this itty bitty "Baby Huey" from Kidrobot.  Now we know what happened when Seth Rogen and James Franco made that movie about whacking this dude, so what do you think the retaliation will be when this plastic bed wetter makes his debut at San Diego Comic Con?  Do you think the North Koreans will invade Kidrobot's booth and buy them all up, preventing them from being obtained by the general public?  Will they release secret information about Frank, like how long he has been a subscriber to Cat Fancy magazine?  Are they gonna hack my website for posting this?  The world as we know it could change at the hands of a hilarious vinyl figure.

Now don't fret like this little guy if you aren't going to Comic Con, cause he will be available on a wider scale in stores and online starting August 6th.  At 8 inches tall and only $65, that's a lot of bang for your buck.  Hopefully not a literal bang from an angry North Korean army.  Viva la Revolucion!!!!! 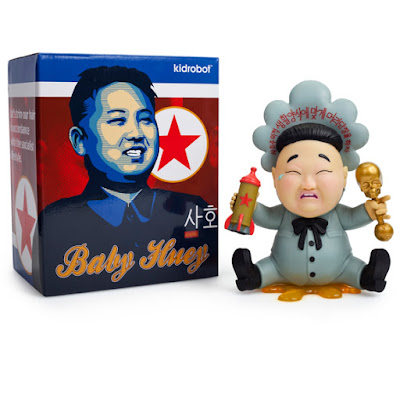 Baby Huey Final 2 from KRVids on Vimeo.
Posted by Chris at 8:41 AM