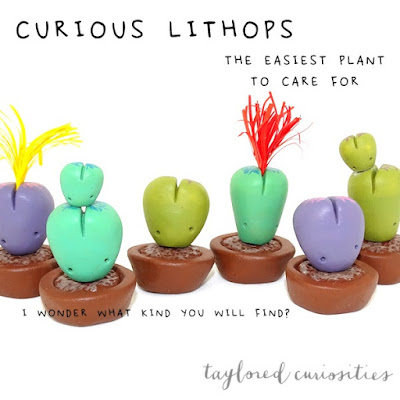 When Sharon and I bought our house I distinctly remember the garden in front looking impressive.  This was a few years ago and my memory is not always the best, but it seems that the simple act of us moving in has caused the thing to deteriorate.  My neighbor's is really impressive, and being that they're right next to one another, makes ours look even worse.  The other day I tried to go out and pull some weeds up, but they started flowering which made me doubt whether I should pull them or whether they we even weeds at all.  They have obviously been paying attention to humans and realized that as long as you're pretty you can get away with anything.  So after being punked by a bunch of rogue plants I decided the only course of action was to go eat lunch and just deal with the nasty looks we get from the people we live near.

I'm sure I would fare much better with these Curious Lithops from Taylored Curiosities.  For one, they're always gonna look like this, so the maintenance after putting them in the flower bed would be zero.  And two, they'll look good year round as they have transcended the idea of death by being made of clay/resin/other stuff that I have no idea about.  You can pick the one's you want or you can take a gamble and buy them blind boxed.  Spruce up your living space at http://tayloredcuriosities.bigcartel.com/.